As few as five tigers may remain in the wild in Vietnam, surviving in border areas of the central and northwest region of the country.
However, ENV investigations have proven that the illegal tiger trade flourishes in Vietnam with a number of farms known to be selling tiger cubs and trading tiger bones and parts. These facilities smuggle tigers from Laos, Cambodia, and Thailand before slaughtering them for their parts or selling them to the highest bidder.

Tigers in the wild in Vietnam

Tigers left in the wild worldwide

Vietnam is home to the Indochinese tiger (Panthera tigris corbetti). This subspecies is also found in Thailand, Cambodia, Myanmar, Laos and China.

The Indochinese tiger is protected under Vietnam’s wildlife protection laws Decree 64 (2019) and Decree 06 (2019), and banned from international commercial trade by CITES (the Convention on International Trade in Endangered Species). It is illegal to hunt, trap, keep, kill, transport, sell or advertise tigers or tiger products in Vietnam.

The wild tiger population has declined 96% over the last hundred years. The International Tiger Coalition (ITC), representing organizations worldwide working to protect tigers, estimates there are around 3,900 tigers in the wild today. Experts estimate as few as five tigers may remain in the wild in Vietnam. In 2010, Vietnam lost its last rhino and many experts believe that the tiger is likely to be the next high-profile species to be declared extinct in Vietnam

Tigers are mainly traded for their bones, which are boiled to make tiger bone glue, a traditional medicine. The byproducts of tigers after their bones are used are not wasted but sold as highly valued decorations and jewelry. These products include stuffed and mounted tiger “trophies”, skins, claws, and teeth. Tiger cubs are sold live or frozen into the illegal trade. Frozen cubs are soaked and consumed in wine. Vietnam’s few wild tigers are also threatened by habitat loss due to deforestation and the reduced number of large prey species, such as gaur and sambar deer, which they need to survive.

The most common use of tigers in Vietnam is to make tiger bone medicine, a form of traditional medicine used for the treatment of bone or joint-related ailments such as arthritis. The tiger bones are boiled down until they form a glue-like substance, which is then dried in cake-like blocks from which shavings are mixed with wine and consumed. ENV’s investigations show that most consumers obtain tiger bone medicine through personal contacts, witnessing the tiger bone medicine-making process to assure authenticity of the product, and rarely purchasing products over the counter.

The tiger trade is unique when compared to the illegal trade of other wildlife in Vietnam, due to their rarity and high value. This often results in traders taking extra measures to assure secrecy in their dealings. Vietnam’s illicit tiger trade is carried out by elaborate criminal networks that avoid detection through the use of disposable cell phones, connections across international borders, and using friends in high places to facilitate a smooth and steady flow of their product to the consumer.

Most tigers confiscated in Vietnam originate from foreign sources, smuggled into Vietnam from Laos, Cambodia, and Thailand where major farming operations hunt, breed, and launder animals from the wild. A number of key figures behind the tiger trade in Vietnam have been identified by ENV but managed to avoid prosecution by distancing themselves from criminal activities or operating under protection of local officials. Prosecutions tend to target low-level figures involved in transport or organizing sales, and only a few of these prosecutions result in prison time.

In 2021, ENV’s Wildlife Crime Unit recorded 1,213 tiger crime violations. These violations include the seizure of 24 live tigers, including those found in illegal basement ‘tiger farms’ of Nghe An province, the tiger trafficking hotspot of Vietnam.

As of June, 2022, there are a total of 372 tigers recorded by ENV living in captivity in Vietnam, with 297 of these tigers at 17 privately owned farms and zoos in Vietnam. The remainder are kept at four government zoos and rescue centers. Vietnam’s tiger farmers purchase most of their original tigers from illegal sources, including animals smuggled into Vietnam from Cambodia, Laos or Thailand, or possibly traded from tiger breeders in the south.

A small number of tiger farms in Vietnam are known to be selling tiger cubs and trading tigers which have been sourced from abroad. At present, tiger farming does not contribute to a significant part of the illegal trade, although there are concerns about the potential growth of tiger farming in Vietnam.

As a major consumer of the world’s tigers, Vietnam has a critical role to play both to preserve the last of our own tigers and to fulfill our responsibility to other tiger range countries by addressing the illegal trade of tigers and reducing consumer demand in Vietnam.
Tiger crimes need to be recognized and treated seriously, with law enforcement agencies targeting kingpins of the criminal networks and judicial bodies utilizing the full power of the law to prosecute major traders. Immediate action should also be taken to cease the development of tiger farming in Vietnam, including a freeze on breeding, while assessing the strategic importance of each farm in terms of its benefits to conservation.

What is ENV doing to protect tigers?

ENV is working with law enforcement, government decision-makers, and the public to stop the illegal trade of tigers and prevent further development of commercial tiger farming in Vietnam. Our campaign activities include:

– Facilitating public reporting of tiger crimes through ENV’s Wildlife Crime Hotline and assisting law enforcement in addressing specific crimes reported to ENV
– Strengthening legislation and policy and advocating stronger support from key decision-makers in government relevant to the protection of tigers
– Carrying out a wide range of public awareness campaigns through radio, television and national media to increase awareness and participation amongst the general public to protect Vietnam’s tigers and reduce consumer demand
– Working with law enforcement agencies to gather intelligence on the key traders and the criminal networks they operate that are smuggling tigers into Vietnam
– Independent monitoring of all tiger farms and private zoos in Vietnam to suppress the growth of tiger farming activities and prevent leakage of captive born tigers into the trade

The half marathon helped to raise awareness and funds for ENV’s tiger program. ENV’s tiger program is seeking to keep tigers wild and eradicate demand for tiger products such as tiger bone glue, a traditional medicine in Vietnam and China. 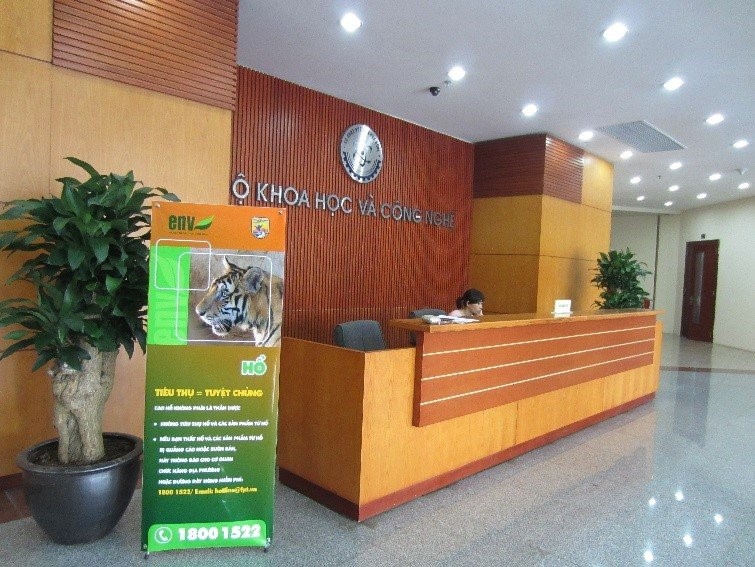 As part of an ongoing initiative aimed at raising awareness among government employees, ENV has partnered with a number of ministries at the central level and provincial agencies to place awareness banners in the main lobbies and entrances of government buildings. Banners have been placed prominently in 10 central ministries, in addition to 21 markets throughout Vietnam.