Bears confiscated or voluntarily transferred to rescue centers in 2021

Vietnam is home to two species of bear: the Asiatic black bear (Ursus thibetanus), also known as the moon bear, and the Malayan sun bear (Helarctos malayanus). Both species are protected under Vietnamese law, Decree 160 (2013), which was recently amended by Decree 64 (2019). It is illegal to hunt, trap, possess, kill, sell, or advertise bears or bear products in Vietnam. They are also protected by international law under CITES, prohibited from international trade as Appendix I species.

The demand for bear bile poses a critical threat to Vietnam’s bears. Bears are hunted in the wild and sold live to commercial farms where they are exploited for their bile to meet consumer demand. Bears are also hunted for their meat and body parts, or to be kept as pets. Additionally, deforestation and expansion of human development have also resulted in habitat loss for Asiatic black bears in Vietnam, further reducing wild populations.
Primary Threat

Bear farming and the bear bile industry in Vietnam

Vietnam saw rapid economic growth in the 90s which resulted in more people being able to afford medicine that had previously been unavailable to them. For example, the use of bear bile became a popular traditional medicine to cure a variety of ailments. To extract bile from a bear, the animals are confined in small cages, often fed beer which stimulates bile production. They are barely able to move their bodies within the confines of their cage, and day after day for 20 to 30 years, they are stabbed with needles to take their bile. Not only do the bears groan in pain and shed tears during bile extraction, their mental state declines rapidly from years of abuse and caged isolation.

In Vietnam, bear bile has been illegal for decades and demand for it has been decreasing, yet almost 300 bears still remain captive across the country.

When the government began cracking down on the industry in 2005, there were not enough rescue centers and sanctuaries to take the 4,300 captive bears from farms. Thus, the government allowed owners to keep their bears, but microchipped all captive bears and started conducting regular inspections to make sure the owners were not extracting bile or obtaining new bears. Sadly, the microchipped bears are considered “legal” for this reason.

In 2019, the National Forest Protection Department re-chipped all legal bears in Vietnam with the aim of strengthening captive bear monitorization. Any illegal bears (unchipped or unmatched chips) are to be confiscated by local authorities in accordance with the law.

Because there is no longer any legal monetary value to keeping bears, ENV is urging bear farmers to voluntarily transfer their bears to a rescue center where they can live out the rest of their lives in a semi-natural environment that allows them to heal after years of suffering. The majority of the remaining captive bears in Vietnam are reaching the end of their life, some caged for 20 years. Because they can never be released back into the wild, voluntary transfer to a rescue center is the only humane option before their heartbreaking existence ends from old age.

What ENV is Doing to Protect Bears

Since 2011, ENV has been pressuring farm owners to give up their captive bears. On one hand, the campaign targets bear farm owners with monthly communications by sending them postcards or letters with strong messages to urge them to stop bear farming. On the other hand, quarterly communications targeting chairmen in areas with prevalent bear farming reminds them of the law and pushes them to address illegal activities within their area while also encouraging local bear farm owners to give up their bears.

ENV keeps record of these bear farm hotspots, monitoring bear farms, profiling owners, and documenting violations. These inspections coincide with other monthly campaign activities in bear farming communities such as events at schools and markets. Authorities report that ENV’s focus on bear farmers has a substantially changed the attitudes of farmers, evidenced by many farmers having given up their bears.

After years of hard work, the number of bile bears has decreased to 294 bears as of June 2022. Additionally, 40 of Vietnam’s 63 provinces are now free of bile bear farms. However, while many provinces in Vietnam have taken great strides to become bile bear-free in recent years, Hanoi (and especially Hanoi’s Phuc Tho district) remains the biggest bear bile farming hotspot in the country. In Phuc Tho district alone, 139 bears are being kept for their bile, making up more than 47% of Vietnam’s total captive bile bears and 93% of Hanoi’s bile bears.

The bear farming situation in Phuc Tho is a dark smear on the image of Hanoi, Vietnam’s capital city, both on a national and international scale. Now, the residents of Phuc Tho are calling for decisive action from authorities and bear owners to end this outdated and cruel practice.

Hanoi must not be left behind as the rest of the country ends bear farming! It’s time for Vietnam’s capital to set an example and take lead as the country’s guiding light to end bear bile farming in Vietnam once and for all.

Students from 910 schools across the country submitted at total of 97,184 letters over the course of six months in 2019, all writing to bear bile farmers urging them to end this cruel and illegal form of business and transfer their bears to rescue centers.

At the conclusion of the contest, a total of 11 winners were awarded prizes for their efforts (seven individual prizes, two creative prizes, and two group prizes). Winning entries ranged from a letter written from the perspective of a bear longing for its freedom, an ex-bear owner persuading a colleague to quit farming bears, to illustrated poems, letters from the future, and a personal plea to a bear-owning father. These winning entries were selected from a shortlist of 100 entries by a panel of judges comprised of an established writer, a literature teacher, and ENV senior staff members. The Letter Writing Challenge and its ceremony were hosted as part of a broader partnership by the End Bear Farming Coalition comprised of World Animal Protection, Four Paws, and ENV to expedite an end to bear farming in Vietnam. 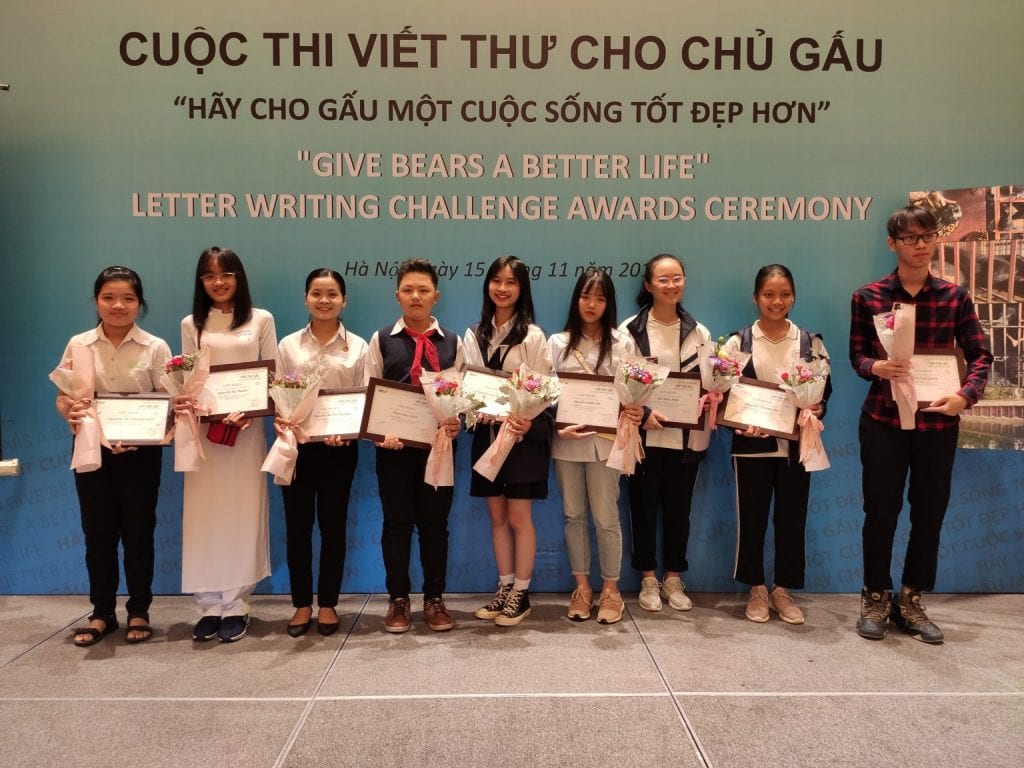 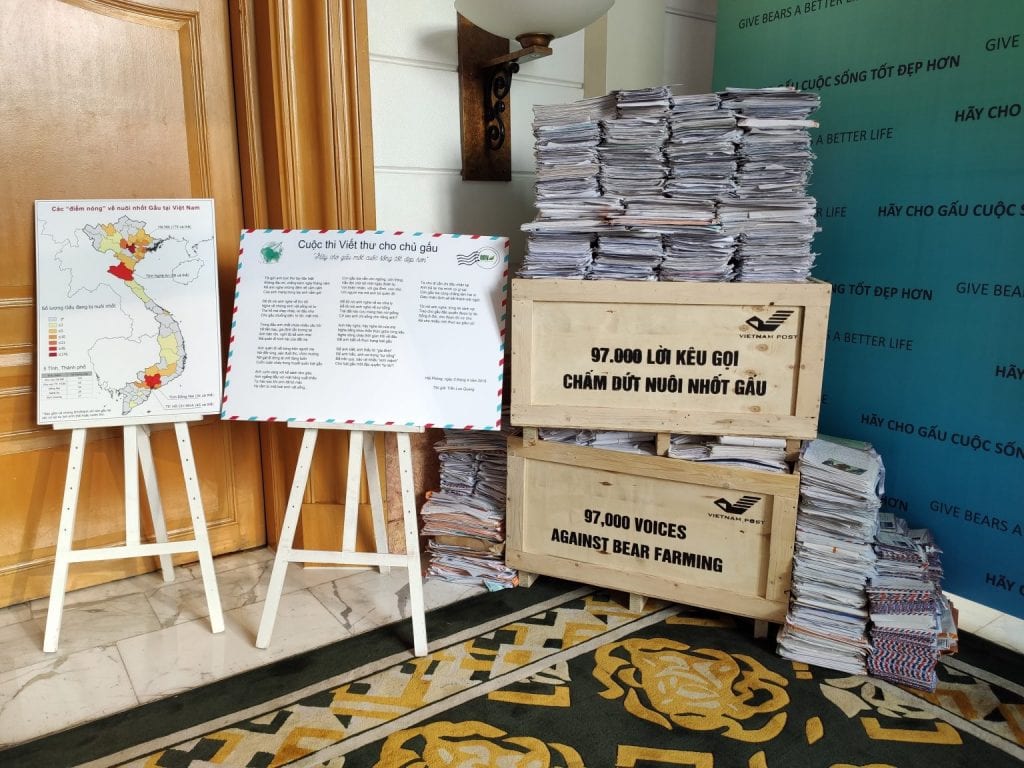 More than 800 runners from 43 countries around the globe came together for the “Run for Bears” event in 2017, signaling their strong support for the closing of bear farms, reduction of bear bile demand, and expediting an end to the cruel and illegal bear bile industry. The 11th Annual Hanoi Half Marathon was hosted by Hanoi Red River Runners and organized by Sporting Republic, in partnership with Education for Nature Vietnam (ENV).

ENV’s Bear Program and Wildlife Crime Unit (WCU) are involved in the regular monitoring and surveying of bear farms which are conducted by government authorities and ENV NGO partners. ENV’s WCU also investigates and responds to reports of other crimes involving bears or bear products.

Additionally, ENV is very active in working with Forest Protection Departments (FPD) to further convince bear owners to give up their bears. In the convincing missions, ENV and FPD meet with bear owners to discuss the disadvantages of keeping bears which are expensive to feed and care for, as well as the opportunity to give them a better life at a rescue center. 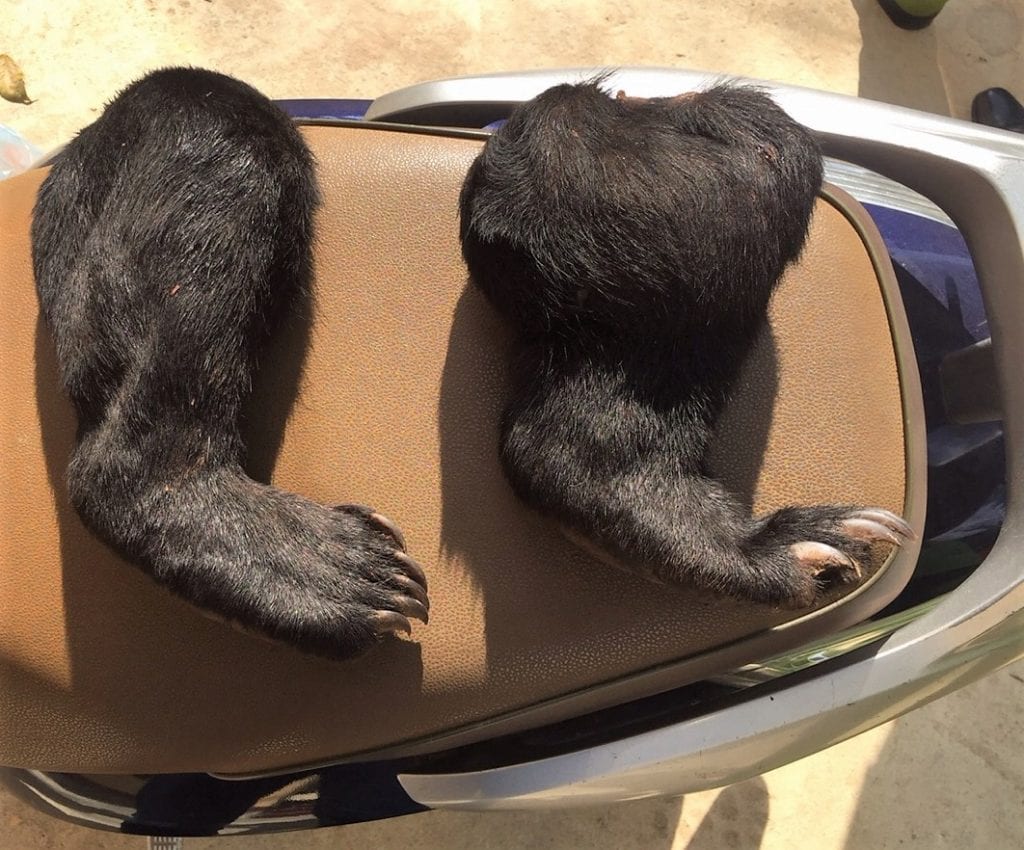 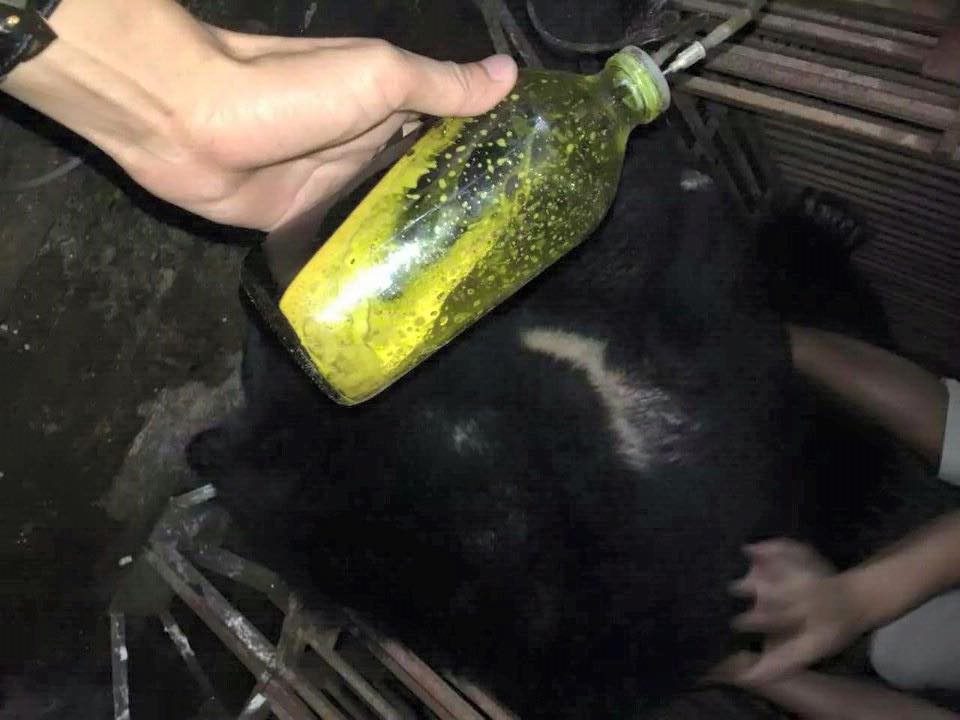 When information regarding a bear crime is uncovered by ENV investigation or reported to ENV by the public, we work with Vietnamese law enforcement to address the crime and arrest the criminal. ENV also works to build support among key government leaders to strengthen policy and legislation protecting bears.

ENV recognizes the importance of addressing demand reduction as an essential part of any effort to successfully end bear farming and trade. Reductions in demand must correspond with the phasing out of bear farms, or consumers will simply purchase bear bile products elsewhere, such as from farms in China or Laos.

To understand how to change public behavior and consumer demand, ENV completed two major baseline surveys examining public attitudes toward the use of bear bile in 2010 and 2012. In late 2014, ENV completed major surveys in Hanoi, Ho Chi Minh City, and Da Nang in order to evaluate changes in public attitudes toward use of bear bile, and another survey in Hanoi and Ho Chi Minh City was undertaken in 2019 (results pending release).

As part of a strategic campaign aimed at reducing demand for bear bile, ENV conducts regular campaigns via Public Service Announcements (PSAs) on television and radio, which raise public awareness about Vietnam’s bears to decrease consumption of bear bile and bear products. In addition to this, ENV continues its longstanding partnership with the Voice of Vietnam (VoV). VoV is the country’s primary radio channel reportedly reaching all 63 provinces nationally with monthly radio programs covering current topics of public interest or concern and highlighting public actions and enforcement news. All 5-10-minute VoV shows are aired live on the highly popular VoV1 News, which reaches millions of radio listeners across the country. ENV also airs 20-40 second ads on VoV to educate the public about the exaggerated medicinal efficacy of bear bile and the negative impact on bears in Vietnam due to its use as traditional medicine.