In 2005, the ENV Wildlife Crime Unit (WCU) was created to support law enforcement authorities across Vietnam by alerting them to public reports of wildlife crime and assisting them in the legal procedures required to effectively combat wildlife crime, including dealing with confiscated wildlife and strictly punishing criminals. The WCU is composed of eight team members who work directly with the public and authorities across the country on a daily basis to tackle wildlife crime and uphold wildlife protection laws.

An integral component of the WCU is the national toll-free Wildlife Crime Hotline, also created in 2005. When ENV receives a public report of wildlife crime through the Hotline, a Case Officer is immediately assigned to the case and works with authorities to address the violation according to established response plans. ENV’s Case Officers push authorities to act quickly and effectively, providing support where necessary, with the aim of securing a confiscation and arrest. ENV then follows up with authorities to determine if the case has been appropriately handled, and assists them in transferring wildlife to a rescue center where needed or addressing any legal issues that might arise.

From start to finish, each case is documented on ENV’s secure online Wildlife Crime Database. As of December 2021, the WCU had documented more than 22,000 wildlife crime cases, comprised of over 59,300 wildlife violations. The hotline receives an average of 9-10 reported cases a day. Since 2005, tonnes of wildlife have been seized and thousands of endangered animals have been saved from the illegal trade as a direct result of ENV’s coordination with law enforcement authorities and members of the publi

In 2021 alone, ENV received a total of 3,703 reported cases with 9,847 violations. Most of these were advertising and selling cases (2,594). After advertising and selling, the most frequently recorded cases were possession (962) and trafficking (182). These reported cases resulted in 1,058 live wild animals confiscated from Vietnam’s illegal wildlife trade and many wildlife trafficking criminals arrested.

In addition to the WCU, ENV also created a special Investigation Team that exclusively focuses on investigations of major wildlife trafficking networks by providing valuable information and support to law enforcement agencies to ensure these network leaders are caught and imprisoned.

ENV’s primary investigations focus on criminal networks and their leadership behind the illegal transnational trade of tigers, bears, rhino horn, elephant ivory, pangolins, marine turtles, and douc langurs, while other ENV investigations are examining complex issues such as wildlife laundering at commercial and non-commercial wildlife facilities.

ENV conducts investigations both independently and in partnership with police agencies, providing actionable intelligence to law enforcement that results in arrests and prosecutions. ENV also partners with law enforcement authorities in other countries where Vietnamese-led wildlife criminal networks operate, and ENV investigations have led to the arrest and prosecution of multiple leaders of major transboundary criminal networks in Vietnam and other countries.

The biggest success in ENV's history

Thus far, the biggest success in ENV’s history came about in 2015, when ten metric tonnes (10,000 kg) of marine turtles were confiscated and the brother of the most infamous Vietnamese marine turtle kingpin was arrested and prosecuted as a direct result of ENV’s targeted investigation. 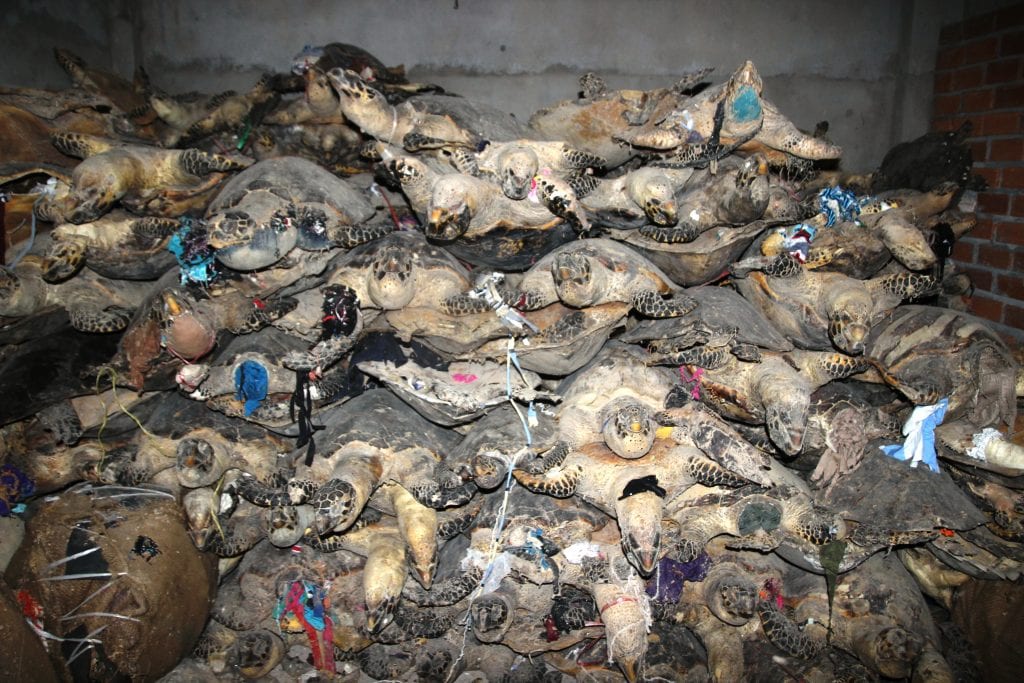 In 2013, ENV developed and initiated a campaign to assess the prevalence of consumer wildlife crime in major cities of Vietnam and to evaluate the effectiveness of authorities in addressing violations reported within their jurisdictions. Since then, intensive consumer wildlife crime surveys have been carried out in more than 30 districts of 10 provinces/cities across the country, including Hanoi, Ho Chi Minh City, Quang Tri, Thua Thien Hue, Nghe An, Can Tho, Nha Trang, Ba Ria Vung Tau, Quang Nam, and Da Nang, with a total of 16,556 establishments inspected.

Establishments that are monitored include restaurants, bars (including karaoke bars and wine shops), traditional medicine (TCM) shops, pet shops, hotels, and markets. Upon completion of each survey, the results are reported to each district’s People’s Committee and the provincial Forest Protection Department (FPD), along with a formal request to address the violations. After a period of 60-90 days, survey teams return to the district to re-inspect establishments with previous violations to assess the effectiveness of law enforcement in eliminating the violations.

In all, ENV’s Wildlife Crime Unit is widely credited with having helped transform the quality of law enforcement response to wildlife crime in Vietnam by promoting greater transparency, sustaining a high level of support to authorities, and publicizing progress to the nation’s leaders and public.