Hanoi, October 19, 2022 – Education for Nature – Vietnam (ENV) has once again released The Law Enforcement Responsiveness Report, which has highlighted actions taken by authorities in response to wildlife crime reports in the 62 provinces that received publicly reported crimes (excluding only Bac Lieu) in 2021

In 2020, ENV initiated the Responsiveness Reporting System to evaluate the performance of local law enforcement agencies tasked with wildlife protection, and to calculate a national average which can be compared to each province’s performance. The results are shared with provincial People’s Committees to ensure that provincial leaders are aware of how well their province is performing on a national scale.

The 2021 report suggests a continued high responsiveness rate of 97% for all publicly reported wildlife crime on a national scale, similar to the rate recorded in 2020, which was nearly 98%. However, there was a marginal decrease in the overall success rate nationally, especially with regards to the success rate on cases involving live animals.

This can be partly explained by the severe impact of Covid-19, resulting in late enforcement responses in some cases. However, it also indicates the need for an improvement in the timely nature and quality of interventions following publicly reported wildlife crimes, with the aim of achieving a higher success rate on these types of important cases.

Number of public reports that were transferred to law enforcement agencies by ENV in 2021: 1,056

Percentage of violations reported in 2021 resulting in a confirmed response by authorities.

Percentage of cases resulting in the confiscation of animals and/or legal punishment of the subjects.

Percentage of live wild animal cases reported in 2021 resulting in a successful confiscation of the live wild animal(s). Live animal cases are a critical performance indicator, as they generally require a timely and effective response by authorities in order to yield success. 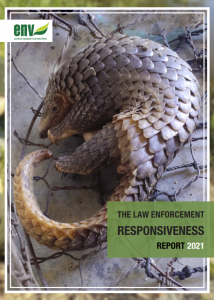 “The results of this report paint a promising picture of efforts to tackle wildlife crime across Vietnam, with a 97% response rate showing law enforcement agencies to be

engaged and concerned with wildlife protection issues,” says Bui Thi Ha, Vice Director of ENV. “However, we need to do better in terms of achieving successful outcomes from our efforts.” Ms. Ha added, “Our expectation is that law enforcement agencies can achieve response success rates of greater than 50%, which will go a long way toward deterring would-be violators and strengthening protection of Vietnam’s biodiversity.”

Ho Chi Minh City (HCMC) and Hanoi continued to be the provinces that received the highest number of publicly reported crimes. While authorities in both cities – especially in HCMC – are responsive to publicly reported wildlife crimes, the respective success rates in the two provinces failed to impress.

Of interest, the overall success rates and that of live animal cases in HCMC are far below the national averages, at 15.9% and 15.8%, respectively.

While recognizing the achievements and successes of different provinces in handling wildlife crime, the report also emphasizes the need for law enforcement agencies to respond quickly and decisively to publicly reported violations, and to apply the law consistently and with determination in all cases.

ENV wishes to thank active law enforcement agencies throughout the country for their efforts in tackling wildlife crime, particularly in provinces where responsiveness and success rates exceeded the national average. ENV extends thanks to Bureau of International Narcotics and Law Enforcement Affairs (INL) for supporting the development and distribution of this report.

Education for Nature – Vietnam (ENV) was established in 2000 as the Vietnam’s first non-governmental organization focused on wildlife conservation. ENV has spearheaded efforts to end Vietnam’s illegal wildlife trade by employing out-of-the-box strategies that strengthen wildlife protection legislation and its application, provide support to law enforcement in addressing wildlife crime, and engage the public to reduce consumer demand and mobilize public action to protect wildlife. ENV is committed to securing a better future for wildlife, both in Vietnam and globally.

Since 2007, ENV has focused its activities in three major program areas that comprise ENV’s integrated approach for addressing illegal wildlife trade in Vietnam.

The Hanoi Half Marathon is back, raising awareness on the issue of traditional medicine made from wildlife