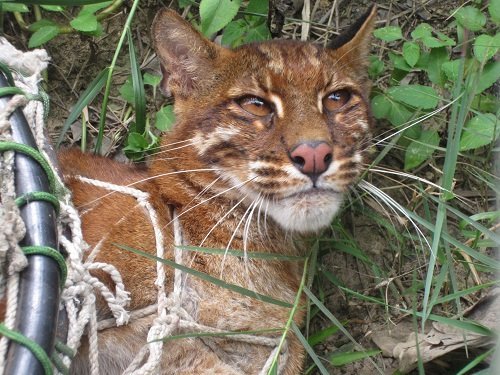 Two tigers and an Asian golden cat were successfully transferred from Nghe An to Soc Son Rescue Center on February 8, bringing an end to more than three months of negotiations.

The case began on November 6th 2012, when two young tigers were seized from a house in Nghe An province (Central Vietnam), where they were being raised illegally as a black market business trend. Fortunately, the tigers had been reported to police by local residents living nearby.

However, contrary to the law, the confiscated tigers were placed at a private zoo called Trai Bo Ecological Tourist Area instead of being transferred to a rescue center. By the end of November, the Vietnam Environment Administration (VEA) had issued an order to the Nghe An Department of Natural Resource and Environment (DONRE) to report on the handling of the tigers and ensure they are transferred to Soc Son Rescue Center within one week, demonstrating strong government support for the case.

The private zoo is owned by a suspected wildlife trader and although many of the animals there including tigers and rhinos have been legally imported, the owner is linked to a number of wildlife crime cases, but wields considerable political influence locally. When transfer papers were approved in mid-January 2013, authorities went to the zoo to collect the tigers but the owner refused to turn them over and the team returned to Hanoi empty handed.

The transfer was finally completed on February 08th (right before the traditional Tet holiday), and was even more successful than expected as an Asian golden cat was also transferred in the trip.

This is a great result and a product of more than three months’ ENV efforts to coordinate with local People’s Committee leaders and government ministries to secure the transfer and move the tigers to a legal rescue center.

In addition, the woman who was originally caught raising the two tigers was fined 75 million VND (approx. US$3600).

Some photos of the transfer: