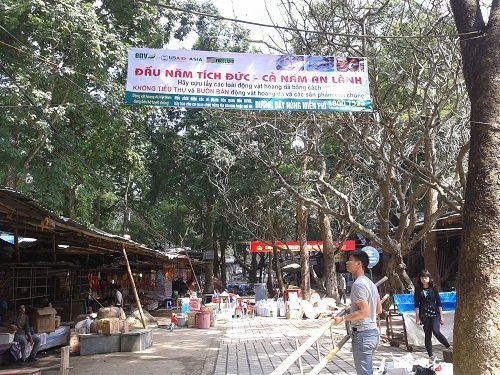 For the upcoming traditional Tet holiday (lunar New Year), ENV has launched a new campaign to tackle wildlife trade and consumption at Huong Pagoda, on the outskirts of Hanoi.

Huong Pagoda is a popular tourist destination, and during Tet and early in the lunar new year, it is visited by thousands of people who pray for good luck. Its popularity is due to the belief that this pagoda is especially lucky; but also because of its beautiful location next to a forest and the Yen Stream. However, the pagoda is also a “hotspot” for wildlife trade and consumption.

As part of the Huong Pagoda campaign, ENV has placed banners throughout the area warning would-be consumers not to consume wildlife, and will be conducting active patrols with local authorities to quickly address any crimes that are discovered.

The message of the banners is to “Act mercifully in the beginning of the year – Enjoy peace for the whole year”, and “save wildlife species by not consuming or trading wildlife and wildlife products”. The banners are hung along two sides of the Yen Stream (the main way for tourists to travel to Huong Pagoda), as well as in Thien Tru Yard (a location within Huong pagoda), from now until the end of the festival season. These banners use Buddhism philosophy to encourage people to not buy, sell and especially not to consume wildlife dishes for Tet parties.

Local authorities have also agreed to actively prevent shops and restaurants from selling wildlife to thousands of visitors that come to the temple following the Vietnamese New Year.

In addition, the Minister of Sports, Culture, and Tourism has also issued a correspondence approving authorities to issue immediate “on the spot” fines if violations are discovered.

The campaign is being carried out by ENV’s “Team North” in cooperation with members of the Wildlife Crime Unit and will begin immediately after Tet.