Wildlife trade punishments need to be as severe as drug trade 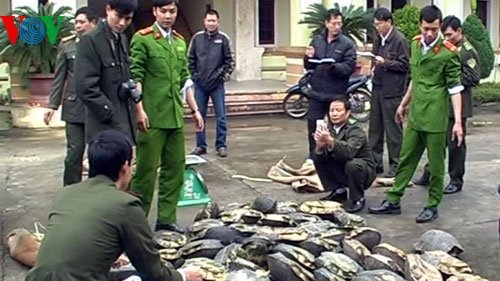 Sanctions against wildlife trade are considered to be quite strong, but are not as effective as they should be.

According to a report from Ha Tinh FPD, in 2012 they arrested 29 wildlife trade cases and confiscated more than five tons of wildlife and wildlife products, mostly pangolins, tigers, and rhino horn.

In the late months of the year, the wildlife trade network typically becomes busy. Since December 2012, Ha Tinh authorities have caught a series of wildlife traders with a wide range of crimes. A typical case was the seizure of 500kgs of pangolins in late December 2012.

In the most recent case on January 27, 2013, Huong Son FPD (Ha Tinh) stopped a private car transporting nearly 150kgs of pangolins. A few days before that on January 23, Huong Son FPD also seized 27 turtles weighing a total of 166 kgs, which were being illegally transported.

Despite the authorities strengthening monitoring and management, traders are still finding ways to operate because the profits in the industry are so high.

“The criminals are really insidious. They split up the animals and follow trails in the jungle, then use small vehicles to transport them. Also, in the Hương Sơn area, there are so many inter-commune trails, which causes more trouble trying to manage the problem”, said Mr. Huấn.

While the punishment level still can’t compete with wildlife trade profits, according to ENV’s records there has not been any subject who has been penalized to the highest level.

To deter crime, Mr. Hung suggests we need to work with three problems: Law regulations need to be tighter, clearer, and easy to apply; public awareness of illegal wildlife trade and consumption issues needs to be increased; and the core factor is to drastically strengthen law enforcement to pose more of a threat to criminals and bring more effective results. “Even if we increase the level of punishment for wildlife trade, if the law enforcement is not strong enough then it will have no impact”, said Mr. Hưng.

On how to limit wildlife trade, Mr. Hưng analyzed: “If we treat wildlife products the same as illegal drugs, then all activities involving wildlife such as buying, selling and using are violations, and we can make a lot of improvements in the way wildlife trade is handled nowadays.”

To stop wildlife trade at the “hot spot” of Cầu Treo International Border Gate, especially during the time of the traditional Tet holiday, Mr. Hoàng Quốc Tuấn said the FPD is cooperating with other authorities to strengthen monitoring and management, as well as establishing a mobile FPD team to work with key locations and areas.

According to some international organizations, wildlife trade profits are increasing from 5 to 20 billion USD per year, making it the second most profitable black market after illegal drugs.

Recently, Vietnam’s Prime Minister signed a Decision to ban the import and export of some key wildlife species. The Ministry of Environment and Natural Resources (MONRE) also issued a correspondence about not consuming wildlife products, especially during the Tet holiday in order to protect wildlife resources and biodiversity.

Mr. Tran Viet Hung says that MONRE is leading the fight against wildlife trade and consumption, and it’s a good signal for other authorities to join the battle, especially during Tet.

“The Prime Minister’s Decision to ban the importing and exporting of some wildlife species comes just in time. This will be the crux to help authorities deal with the rhino horn trade, which had many legal loopholes”, said Mr. Hưng.

Translated by Education for Nature – Vietnam. This translation is unofficial in nature. The Vietnamese language version of this story can be obtained by contacting ENV.