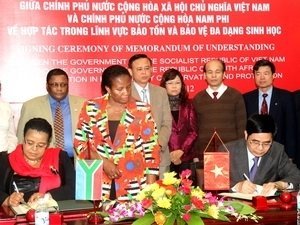 Vietnam and South Africa signed a Memorandum of Understanding (MoU) to preserve and protect Biological diversity, announced the Ministry of Agriculture and Rural Development at a press conference in Hanoi on December 10.

The MOU is signed (Source: VNA)

Established on the basis of bilateral cooperative relations and principles of the Convention on Biological Diversity and the Convention on International Trade in Endangered Species of Wild Fauna and Flora (CITES), the MoU will enhance cooperation in biodiversity conservation, protection and management between the two nations.

After the signing of MoU, Vietnamese and South African missions set up practical action plans to enforce the two Governments’ commitments, which focus on combating the illegal trade of rhinoceros specimens, compliance of CITES regulations, and the sharing of nature reserve management experience.

At the press conference, Edna Molewa, South African Minister of Water and Environmental Affairs, said her country’s appropriate authorities hope to coordinate with Vietnamese partners to prevent the illegal trade of rhino horn.

The Ministry of Agriculture and Rural Development is coordinating with relevant ministries to submit to the Government a decision to make importing rhino specimens into Vietnam illegal.