Liver poisoning from rhino horn use 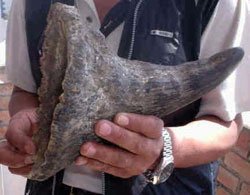 After hearing rumors that rhino horn could help to detoxify and treat many diseases, Mrs. Hoa (Hoang Mai district, Hanoi) bought it without even considering the price. However, after a period of use rhino horn, she felt tired and had developed red spots on her face.

The Center for Allergy and Clinical Immunology at Bach Mai Hospital recently received a patient from liver poisoning apprehended due to the use of rhino horn.

Mrs. Hoa had been ill with an autoimmune disease for eight years, and still had periodic treatment at Bach Mai hospital. Although her condition was relatively stable, she did not feel comfortable using too much western medicine. She had recently heard of the magical effects of rhino horn, than she spent a lot of money to buy some.

However, after one month of use rhino horn, she felt increasingly tired and developed many red spots on her face. During an examination at Bach Mai Hospital, she learned that her liver was poisoned due to the use of rhino horn, and her level of liver enzymes was many times higher than normal.

According to Doctor Nguyen Huu Truong from the Center for Allergy and Clinical Immunology, there is no scientific research that proves the effects of rhino horn as a detoxification treatment.

However, he also said that allergic reactions and poisonings from natural products such as rhino horn, bear bile, and tiger bone glue can be severe and long lasting.